The Fancott Miniature Railway is the oldest miniature railway situated within the grounds of a public house in the UK. The 7 ¼ inch railway is situated in the gardens of The Fancott Public House, Fancott (near Toddington), Bedfordshire, England. The ¾ mile track is laid in an oval with a triangular junction giving access to the station. 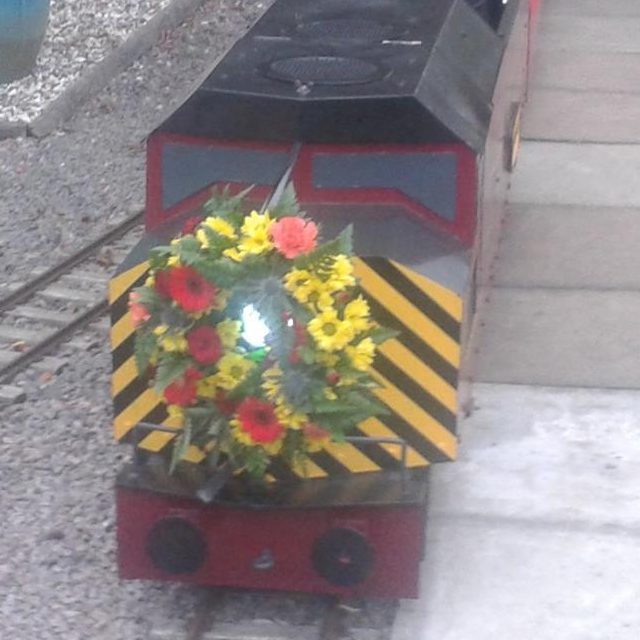 Built by Severn Lamb in 1984 (Build No. 1023) with a Honda look-a-like engine providing 6.6HP the engine arrived in 2002 from Southall Light Railway. Herbie was rebuilt in 2016 by Mr D Radcliffe after a fire broke out at the railway destroying Herbie along with the rest of the locomotives at the railway, Herbie returned to traffic March 20th 2017.

Build by Mardyke Miniature Railways in 1989 with a Brigg & Stratton 6.6HP engine, ‘Dark Star’ was originally named ‘Temeraire’. The locomotive arrived at the railway on the 8th July 2015 from it’s previous owners Mr C Gross who undertook the massive task of restoring the locomotive. Since being purchased by the railway, ‘Dark Star’ is now owned by Ron Stanbridge, manager of the railway. 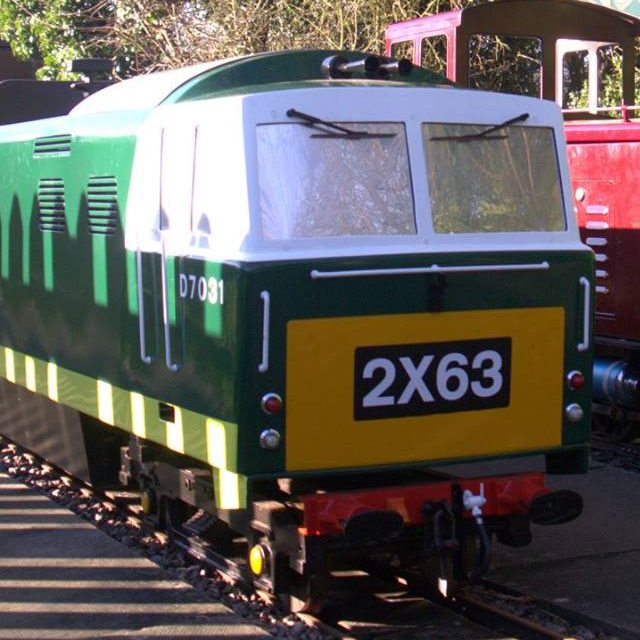 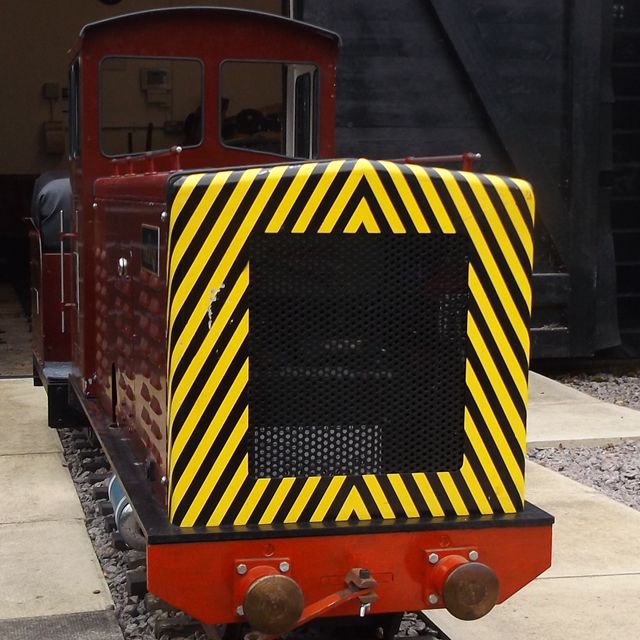 Built by members of the Cinderbarrow Miniature Railway in 2007 it contains a 6.6HP engine. Originally named ‘Tregoss’ the locomotive was renamed in November 2015 when it joined the railway to its current name of ‘Phoenix’.

Built by Mr P Whitmore in 1994, Pippa arrived at the railway around 1998 and was destined for the scrap heap. After some restoration in 2001 Pippa started working trains on the railway and unfortunately in 2015 Pippa was almost completely destroyed in a fire. Pippa is currently being restored by members of the railway and members of Watford Miniature Railway in the hopes it will one day run again. 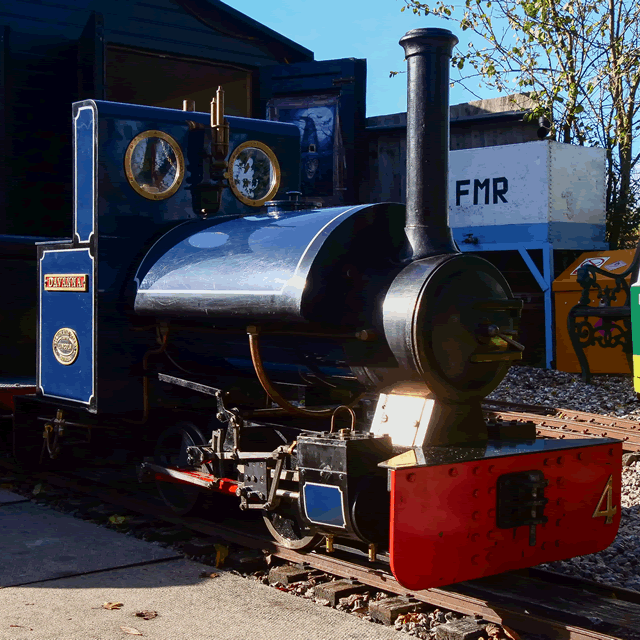 Built by David Humphreys in 2013 from a kit produced by Station Road Steam. Davanna arrived at the railway in March 2019 from it’s previous home at the Fembell Pub, Rochester after it closed down in 2017.

The Fancott Light Railway (1975-1986)
The original line located in the grounds of The Fancott Pub first started operating in 1975 as a 10 ¼ inch gauge railway under the name ‘The Fancott Light Railway’, the line was a simple back and forth line with only one track measuring around 150 yards. The original line was operated by Mr E Harper and at the time ran only a single locomotive, the ‘Fancott 2’. The 'Fancott 2' was built by Mr E Harper and was green in colour featuring a petrol engine and designed to look like a steam locomotive, fitted with fake connecting rods and cylinders.  The 10 ¼ inch line closed in 1986 and remained on the grounds, disused until 1996 when the line was finally replaced. Unfortunately no pictures appear to exist of the original 10 ¼ inch railway or of the 'Fancott 2'.

The Fancott Miniature Railway (1996-2001)
In 1996 the original 10 ¼ line was finally replaced with a 7 ¼ inch line opened by Mr A Wallman and operated by Mr R Bennet. The new line ran with one locomotive an 040 Romulus named ‘Ffreddy’. The line was a balloon shape with a turntable in the main station and a loop line to return the locomotive to the front of the train. The line operated from 1996 until 2001 when it changed management to a Mr R Stanbridge, the current chairman of the railway. 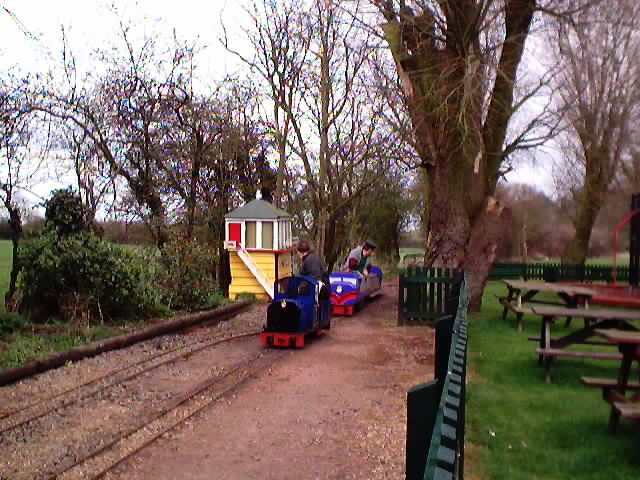 The Fancott Miniature Railway (2001-Present)
In 2001 the original 7 ¼ inch line was closed and a new line was built with plans to construct a locomotive shed, steaming bay, signal box and two loops in the form of an oval. To achieve this 1000 yards of track was hand-built in Bristol, including the constructions of points. 200 tons of 14mm stone was delivered, track beds and drainage were installed and a level crossing was constructed. By the end of October 2001 the engine shed and track bed was almost completed. 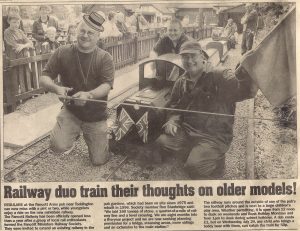 The railway reopened during the Easter of 2002 still operated by Mr R Stanbridge and was officially opened by the late Ian Pearce on 29th June 2002. Over the next several years various changes and improvements were made including the introduction of a steel footbridge in 2003 that allowed people to cross over the railway. In 2005 the Steaming Bay and Signal Box were constructed allowing for Steam Locomotives to visit the railway and in 2007 a motorised point was added allowing the railway to run clockwise for the 1st time in 7 years.

In 2008 full aspect colour signals were added to the railway, constructed using off the shelf electronics and coloured led bulbs, the signals can all be controlled from within the signal box with switches located in an accurate track diagram. In 2010 a new loop line was created so that both platforms 1 and 2 could be accessed when arriving into the station. 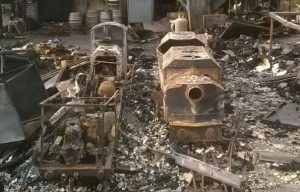 Members of the railway salvaged what they could including the chassis of Herbie and Pippa, unfortunately the privately owned locomotive was now part of the ashes. In the immediate period after the fire help was received from far and wide in the form of donations, locomotives, carriages and man hours. The railway reopened on 4th July with a locomotive and carriages on loan from the Swanley New Barn Railway. Pippa was taken in by members of the railway as a restoration project which is currently underway.

The railway purchased two new locomotives, a Hymek called ‘Dark Star’ shortly after opening and an 060 called ‘Phoenix’ in November of the same year. In October of 2016 Herbie was sent away to be rebuilt by Mr D Radcliffe and was returned to the railway on March 20th 2017 in a like new condition. Since then the railway has purchases it's first steam locomotive since Ffreddy left in 2000, a Stafford 040 called Davanna which arrived at the railway in March 2019.